Massasaugas eat small rodents like mice and voles but they will sometimes eat frogs and other snakes. They hunt by sitting and waiting for prey to come to them, rather than actively moving and pursuing prey. 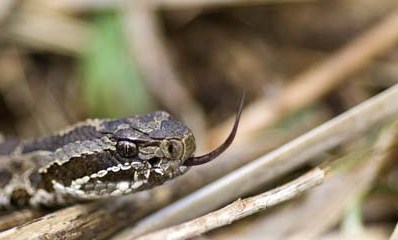 Heat sensitive pits near the snakes' eyes alert the snake to the presence of prey. They can find their prey by sight, by feeling vibrations, by sensing heat given off by their prey, and/or by detecting chemicals given off by the animal (like odors).