Eastern Massasauga Rattlesnakes rarely use their rattle, opting to stay motionless in response to intruders. These secretive, docile snakes only strike humans when they feel threatened or cornered.

The snake's dark scales provide good camouflage as the species hides in its wetland habitat. A massasauga prefers to hide or escape rather than strike a person. Many people who visit parks with massasaugas never see these shy creatures and may have walked by one with out noticing it. In our field research study when we want to find as many snakes as possible, we often regrettably overlook a snake.

Massasaugas rarely bite humans; even when they do, it is hardly ever life-threatening. Snakes don't always inject venom when they bite because venom is "expensive" for them to produce, and they will try to save it for use on prey. In fact, 25 percent to 50 percent of all rattlesnake bites to humans contain no venom. However, if you are bitten, remain calm, move as little as possible, and seek medical help immediately.

Can you see the massasauga in the photos below? 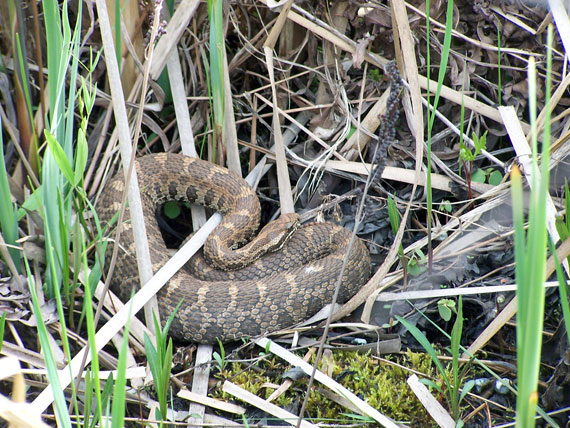